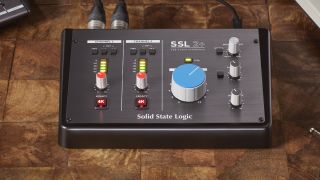 If you make music on a PC or Mac, an audio interface is pretty much an essential piece of kit. In a nutshell, the best audio interfaces for production and music-making enable you to get high-quality audio in and out of your computer, and to connect some essential studio gear during your production session.

Once you’ve got your hands on an audio interface you’ll be able to plug in microphones, electric guitars, synths and other instruments – perhaps even MIDI equipment, too – and to hook up a pair of studio monitors and headphones.

When choosing the best audio interface for your home studio, the first thing to work out is the number and type of inputs and outputs you need. If you only want to plug in one microphone or instrument at a time – which, if you’re a solo producer who generates most of their sounds inside the computer, you probably will do – just one or two inputs will be enough, but if you want to record a live band, you’ll need far more than that.

Multiple outputs can be useful if you want to set up separate headphone mixes (if you’re a DJ, for example) or send audio elsewhere for further processing.

You’ll typically find both XLR and 1/4-inch inputs on an audio interface, often combined into combo connectors so that you can plug mics, guitars, synths and the like into the same input. Many interfaces have a phantom power option, too, which is required to use certain microphones.

Some audio interfaces have MIDI I/O on them, which could save you from having to buy a separate interface for external gear. If you only intend to use a MIDI keyboard, though, remember that this could plug into one of your computer’s other USB ports, so MIDI I/O might not be an essential requirement.

Audio interfaces typically run over USB or ThunderBolt, and you first need to make sure that the one you choose will plug into your computer. We’re now starting to see interfaces with USB-C connectors, but these can still plug into older USB ports with the right cable or adapter.

Many are class-compliant, which means you can just plug them in and start using them, and bus-powering is a feature to look out for, too, as it means you don’t have to plug a mains power supply into your audio interface. It’s also worth checking to see if your interface has iOS compatibility, if that’s important to you.

Most contemporary audio interfaces offer a low-latency recording option, which means you can stay in time with your project when you’re adding more tracks. Some interfaces also promise latency levels that are low enough to use effect plugins in ‘realtime’ on the input as you record, while others have have their own DSP processing built into them.

In the end, the best audio interface for you will at least partly come down to price, so you’ll be pleased to know that our list of recommendations below covers a broad range. Read on to find out what we consider to be the top audio interfaces on the market right now.

Arguably the best audio interface you can buy for less than $200, The iD4 is a simple two-input/two-output offering featuring a mic preamp – complete with phantom power for using condenser mics – as well as an instrument level DI for plugging in your guitar or bass. On top of this, there’s a main output for your speakers and dual headphone outputs.

The whole thing is powered via USB and, with Apple’s camera connection kit, it can also work with an iPhone/iPad. However, the studio devilry is in the detail: Audient has really thought about everything with value and usability in mind, making what is a budget solution feel anything but inexpensive. The Audient iD4 is, quite simply, the best USB audio interface we’ve seen at this price for a long time

Get ‘that SSL sound’ at an amazing price

Compact interfaces with pro features and connectivity, the SSL2+ promises an affordable version of ‘the SSL sound’, bringing the feel of a gazillion recordings made in 7-figure recording studios within reach of everybody.

This is the big brother to the standard SSL2, the main difference being that the 2+ adds two outputs to the 2-in, 2-out configuration of the 2, MIDI In/Out plus an additional independent headphone out (with both being able to monitor different mixes). There’s also the 4k button which adds some extra presence and high-end zing (and, more importantly, makes you feel that little bit more ‘pro’).

There are two combi mic/line inputs with Hi-Z (impedance) options for switching between guitar and bass signals or those from synths or drum machines. A +48v option also allows the connection of both condenser and dynamic mics.

With great monitoring and recording quality and a flexible I/O configuration, the SSL 2+ comes highly recommended

A compact, slick 2×2 audio interface at a competitive price

Komplete Audio 2 is a two-input, two-output design with two identical mic/line/instrument inputs. Connections are on space-saving combi XLRs with individual selector switches to select between line and instrument. 48V phantom power, meanwhile, is engaged globally via a single switch.

In addition to the inputs, the front panel includes a hardware monitoring balance knob (Input/Host) and headphone output with independent control.

The main output level is controlled from a large output level knob on the top panel. Here you’ll also find the input meters, alongside phantom and USB indicators. Round the back you’ve got the USB B connector, a pair of balanced outputs on TRS 1⁄4-inch jacks and a Kensington Security slot.

It makes our best audio interface list because the performance of the Komplete Audio 2 is as slick as its looks, and though the features are basic, it does its job admirably. And when you consider the excellent software bundle, it’s great value.

With high-quality Onyx mic pres, balanced analogue connectivity and operation up to 24-bit/192kHz, the bus-powered Onyx Producer 2.2 audio interface is more than capable of getting clean signals in and out of your DAW. There are two identical mic/line inputs with combination XLR/jack connectors. Each has a manual green backlit switch to select a Hi Z instrument, and there’s a global backlit switch for 48V phantom power.

Input signals can be monitored with zero latency using the Input/DAW Mix knob, and rounding off the front panel are a large Monitor level knob and headphone output with level knob. Round the back you’ll find a pair of 1⁄4-inch jacks for the monitor output, and also a pair of MIDI connectors (In and Out), which is very handy. Throw in the robust metal case and you’ve got a compact workhorse device that should last for years. You also get a DAW, Tracktion T7, in the box.

A great competitively-priced option with plenty of connectivity

All units in the range have received physical and technical upgrades, with improved preamps (now up to 56dB gain), balanced connectivity throughout, and the inclusion of Focusrite’s ISA transformer preamp emulation option (Air). On the bus-powered Scarlett 4i4 you get two mic/line/instrument inputs with gain, two line-level TRS inputs and four TRS outputs.

The 4i4 supports Focusrite’s Control application, which means that a number of settings can only be made in the software. The app also handles low-latency monitoring.

As we’ve come to expect from the Scarlett series, the sonics are neutral and the drivers reliable. The Air option tilts the frequency response towards high frequencies, and this can be great for taming undesirable proximity or adding high frequency lift.

With a decent software bundle included, this is a solid upgrade and a great affordable audio interface.

Steinberg has pimped-up its UR range of audio interfaces, introducing USB 3.0 models for PC, Mac and iOS. The UR22C is the most affordable of these.

Each of the interfaces offers USB Type-C connectivity (or USB 3.1 Gen 1 SuperSpeed, to give it its official title) and operates at 32-bit/192kHz audio resolution. There’s MIDI I/O, too, as well as DSP that provides zero-latency effects that can be used when monitoring. These can be accessed via the dspMixFx mixer.

Unsurprisingly, the UR22C is a 2-in/2-out audio interface. You get a couple of balanced Neutrik combo inputs, each of which sports a Yamaha D-PRE mic preamp, and two balanced line outputs.

With its rugged metal casing, the UR22C is the best audio interface for you if you want something that can be slung in a backpack without fear.

First of all thank you very much for visiting our website https://apps4desktop.com/. This website is especially developed for apps that work on PC/Laptop/ (Windows and Mac). Similarly, the Guitar Interface For PC is one of the best collections for the users. This is very famous among the users and always enjoys the full functionality of the Guitar Interface For PC. However, we are not responsible for smooth working on your PC/Desktop/Laptop, the reason not limited to this: hardware not supported, some antivirus installed that consider it virus/malware/adware.